Each year, in the month of June, Portuguese cities and villages enjoy a two-week long “block” party. The parties go on long into the night and feature processions, music, singing, dancing and grilled sardines. In contrast to Carnaval, these two weeks are dedicated by the Catholic Church (remember that a large percentage of Portuguese are Catholic) to three beloved saints; namely Saint Anthony of Padua, Saint John, the Baptist and Saint Peter, the Fisherman.

Saint Anthony was born in Portugal, and became a Franciscan monk.  He traveled to Italy and made his home in Padua. St. Anthony is the saint of lost things (including people and souls), and and also of newly weds (perhaps because newly weds are lost – maybe because they are lost to everyone but their spouse? – I don’t know. He was named a Doctor of the Church for his ability to clearly teach the Bible. He is often portrayed with a the Christ Child, who is believed to have appeared to St. Anthony. His feast day is June 13, the day he died. St. Anthony is the patron saint of Lisbon as well as of other towns.

John the Baptist’s feast day is recognized on June 24th, his birthday. (Note: most saints are recognized on the day they died. Only John the Baptist and Mary, the mother of Jesus, are recognized on their assumed birthdays.) It is close to the summer solstice and you may notice many church festivals coincided with pagan customs. In addition to being the forerunner of Christ, he is considered the patron saint of tailors (he made his own clothing in the desert) and of shepherds (he called Jesus the Lamb of God). 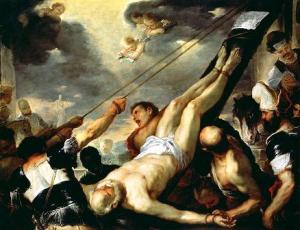 On June 29th, the Portuguese celebrate the feast day of St. Peter, the Fisherman. Being a sea-faring folk and fishermenl, they go all out for this saint with music and dancing. He is considered patron saint to a long list of people including bakers and the the Universal Church. (If you want a full list, you can go here. It’s interesting to read.) When St. Peter was condemned to be crucified, legend tells us that he asked to be crucified upside down because he was not worthy to be crucified in the same manner as Jesus.

Okay, readers, why do you think that St. Peter is so popular? Would you want to have a chat with any of these saints?