George MacDonald, a Scottish preacher and author, had a gentle character who had a mental disability. He went around saying over and over again saying, “I didna ken whaur I come  from.” This week you will see some moments in my life before, during and after Portugal.

My dad’s boss had a house on Fenwick Island, DE. He let my dad rent it at a reduced amount and we spent some lovely summer days walking the beach. We were near Ocean City, Maryland, which had a boardwalk. The last summer before my older brother joined the Army we spent two weeks. We all kind of knew that it was the last family vacation.

In November of 1975, I got a job at a small Christian publishing house (now defunct) in Denver. I boarded in a woman’s home with another young woman who also worked at the publishing house. Judy invited me to go to her the young adult Fifties Party at her church. It sounded like fun, so I dug into my wardrobe. I got engaged to a man I met in a college class – Modern Fantasy Literature – but he was ready to get married, and I knew I wasn’t.

At the end of a year, being thoroughly fed up with working in a cubical, I accepted a position at West Chester Christian School as the fourth grade teacher. How I loved doing that and loved my students. Most of the time, at any rate. Harry and I had dated when I was in high school, and broke up over some silly thing. He came back for another round, invited me to visit him in Portugal and before I returned to the states, he had put an engagement ring on my finger.

We the following summer, and I went back to Portugal with Harry and the idea that we were going to stay there until we died. With a few visits to family and friends in the states, of course.

We were so excited about having our little girl followed by another little girl and finishing up with a little boy. We were content. Our children were thriving in Portugal. We never imagined our Paradise would end. But it did. In the spring of 1999, we left part of our hearts in Portugal and ended up in Lancaster County, PA. It was beautiful, but it wasn’t home. Not for us.

We had friends, and Harry had a job, but those were painful years trying to re-enter the American culture when we felt mostly Portuguese.

Eventually, we moved to Florida. But it’s not Portugal.

If you could live anywhere in the world, where would you like to live?

The Curious Introvert-Book Reviews and Other Fun Things

You can read his story here. I am going to take some time off to think of him and to grieve with the other four-legged and two-legged family members. 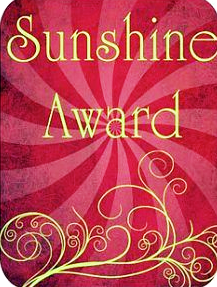 DR actually awarded this to me in December, but with all of the hustle and bustle of that time of year it got lost in the shuffle. Thank you, Dancing Writer, for your kindness and thoughtfulness.

Dancing Rider blogs here: http://thedancingrider.wordpress.com/ about two of her passions: horses and ballet. If you haven’t checked out her blog, mosey on over there and she what she’s been up to!

Our Portugal Christmases were always fairly simple and small present-wise. We never felt hard done-by though. ”Things” come and go. Bethy’s giggles at that age made us smile. We had enough.

We lived off of the economy in Portugal (meaning that with few exceptions and as much as possible we lived as the Portuguese lived). Occasionally someone sent some things from the states. I was yearning to have a red velveteen dress for Bethy for Christmas. Right before Christmas one arrived from a dear friend in the states.

She is bundled up almost to the point of being unable to move in the photo. It was cold. Homes did not have central heating, and there were always a few months when it would have come in handy. The houses also had no insulation. We layered clothes on and off as needed. It was the Portuguese way!
Somewhere in the crazy year after Bethy was born, our landlady demanded a raise in rent. We tried to negotiate with her for less than she asked. She was one of the Portuguese who saw dollar signs when dealing with Americans. We probably did have more than most of them. Extortion, however, was not the way to our hearts.

We left Queijas and set up housekeeping in the Municipality of Loures. The grocery and bakery were handy to our new home. Our apartment was on the first floor up just one flight of stairs and we were permitted to use the ground floor garage for storage purposes. Our landlords were kind and lived in the second floor apartment. They had a six-year-old daughter who liked to talk to us. Next door a small family cared for the wife’s aunt. An ancient cathedral brooded at the other end of the street, and across the street was the best perk of the move: a beautiful park within walking distance.

Around that same time we learned that Harry’s youngest sister was getting married in June. And that meant an early furlough in the states. I was not enthusiastic. For me, it wasn’t “home” anymore. I loved where we lived and loved the people among whom we lived.

Early in May, I got a phone call from my mom. My grandfather had suffered a heart attack, and passed away. This is the grandfather who gave us a home during many of my growing up years. He bought me bicycles and built a sandbox for me. He could cook up a heavenly mess of fresh green beans and bacon, and his ‘mater sandwiches fashioned with mayonnaise and freshly picked tomatoes from the garden were summer’s delight. Unfortunately, he also had a bad habit of being very inappropriate with ladies old and young. The older ladies could duck and blow off the attention which he felt entitled to dole out. My sister and I, however, were unable to defend ourselves.

All of the conflicting emotions drove me to pick up my daughter and a blanket and go sit in the park with the other nursing mothers. At least, I thought at the end of the day, my daughter was safe from his unwanted attention. In two weeks, we would be on a jet heading west.

Being nominated for a blogging award always takes me unexpectedly. It usually takes me awhile to  get my act together. The Field of Flowers Award means a lot to me, especially the kind words that Rachel said about my blog. Thank you so very much. Not only have you honored me with this award, but with it I have discovered your delightful blog. So without further ado, here it comes! 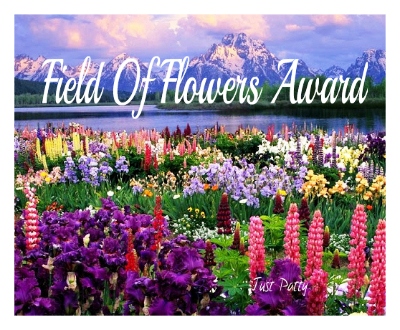 ▪Thank the blogger who nominated you – have gladly done so!
▪Place the award on your own blog – done!
▪Nominate 7 other bloggers and write a little something about why you would give these bloggers “A Field of Flowers”.

In no particular order:

▪Let your nominees know that you nominated them.

Will attend to this momentarily.

You know how a few small things can create a landslide? That’s how my cat collection began. I had no idea of collecting cats. It never ever crossed my mind. My dad had given me a Garfield pencil eraser. Later it was a pewter kitty playing with yarn. But let’s face it: two decorative cats do not a collection make. Oh, and if I had ever collected cats, I gave it up at least a decade ago.

The little fellows should be displayed with dignity, and in order for that to happen, I’d have to take up dusting. So, no more cats unless they actually use a litter box. I enjoyed and appreciated every little knick-knack from each loving person who gave them to me, but enough is enough. And just as a warning to my children, I’m putting your names on every one of them and you will have to deal with them after I am gone. 😆 Anyway, here they are: the cats of the world.

Do you have any collections (intentional or otherwise)?