END_OF_DOCUMENT_TOKEN_TO_BE_REPLACED

From the dark, cold and wet winter, springs emerges with hope in Portugal. Slowly, layer by layer, the warm clothing withdraws into dresser drawers and armários. Pallid arms turn to bronze from the sun’s warm kisses. The aroma of the lemon trees fills the air. Spring is the planting and growing season.

Bethy always liked playing  out-of-doors. She was right beside me when I was hanging up the laundry in the back yard and spent her time examining the garden our landlady had planted. Vanessa, our landlady’s daughter, often came over to play with Bethy.

One day when Bethy was outside in the garden while I was fixing lunch, she came into the house with bright eyes and said. “Mommy! Mommy! I found a “tattole.” I mentally checked the vocabularies of my English and Portuguese languages and asked her if it was any of the things I could think of. No. It was not.

When Harry came home, I told her to ask Daddy what it was.  No  bells  rang for  him, either.  He asked her where it was. She took him by the hand, down the steps and into the back yard. In the yard, she made a beeline for the fence. She pointed to something on it. As we advanced, she said, “See? Tattole!!” And there it was. A large caracol, called a snail in English, with a shell about the size of a quarter was slowly ascending the fence.

Yes, it was a season of growing, planting and hope. Our little rosebud was thriving. And in that season of hope, we were nurturing another hope that would bloom sometime after Christmas. 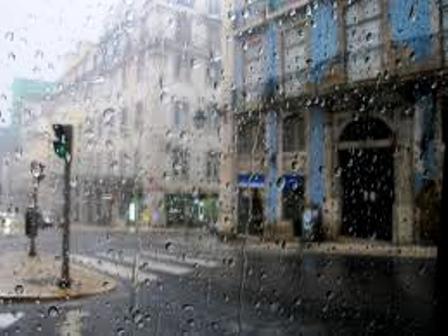 New York City is on the same parallel as Portugal, but the Jet Stream moderates Portugal’s climate. Summer is less humid and hot, and except in the north of Portugal, winter seldom pulls the freezing card. Nevertheless, the cold we did get was a force that drove us to layer on clothing and blankets, and to make as many oven meals as we possibly could.

We had no central heating (or cooling). There was no insulation in our home. It was cold and humid during the rainy season. We seldom saw snow except in photos of the mountains in the north of Portugal. What we got plenty of was rain.

The rain arrived some time in October, and took its good old time leaving in April. Usually. Umbrellas were our daily accessories as we waited at bus stops and walked on the wet, cobbled sidewalks. That year, I tried to remember the sun, but by January it seemed like an old wives’ tale.

The weather brooded over my emotions. Seven months before we had committed to parenthood, but parenthood had stood us up. Granted, it had not been a really long wait as waiting goes, but it was a painful one for us.

Twice during those seven months I walked to the pharmacy to verify what I thought was a pregnancy. Twice I walked home with my hopes dashed. I wondered why it seemed that some women had only to think a pregnancy into being. Every pregnant woman that I saw stirred my envy and I dreaded the well meant but frequent question, “Are you pregnant yet?”

On January 20, 1981 Harry thought I should go to the pharmacy yet again. I decided that I was too fragile to do that. So when he got home from work, he borrowed a car and took the little jar to have the contents analyzed. Half an hour later, he burst in the door grinning from ear to ear; Harry had lassoed the stork.

Have you ever waited a long time for something? What was it?