My dad always said that the motto of the military is, “Hurry up, and wait.” In our case, it was almost a year of wait followed by a summer of hurry up. One of the last minute foot-caught-in-the-door events was my ‘cello.

When I was in fourth grade, I started taking flute lessons. The lessons got derailed by my inability to play an e flat and my anemia. In fifth grade, in another school, the music teacher handed me a ‘cello, and proceeded to teach me how to play. Every week I walked into the music room to his rendition of “If you knew Susie.”

I wish I had a photo to post of the expressions on my parents’ faces when I walked into the house with the ‘cello provided by the school district. They were never truly reconciled to it because 1. it was a really big instrument, and 2. it wasn’t ladylike. Later, I took up the violin as well, but the ‘cello was my favorite.

I ended up studying and playing the ‘cello for about five years. During that time my grandfather, a fan of Charlotte Harris on Lawrence Welk, took it into his head that I needed my own instrument. He found a used student ‘cello and gave it to me.

I gave up my studies in eleventh grade when one of our many moves landed me in a high school that had only a marching band. Without lessons and performance venues, I had little motivation to practice and play. I have lived to regret that choice.

Plan A for the ‘cello as we packed to go to Portugal was to leave it in the states. My grandfather discovered this plan and offered Plan B: he guilted 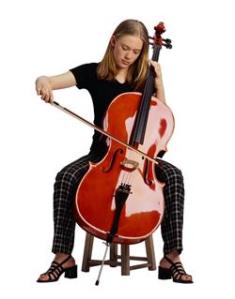 us into taking it.  We had to buy it a ticket. The sad truth was that I never went back to playing it, and eventually the humidity of the Portuguese winters destroyed it.

The day that our wait was over, our families drove us to JFK Airport to see us off. We boarded, and set our faces toward the sunrise. Years later, I learned that my mother had an emotional breakdown that day and ended up in the hospital.