My mother’s idea of a fish dinner had always been either tuna sandwiches or fish sticks. I didn’t find them terribly obnoxious, but I wouldn’t, as they say, wake up in the middle of the night yellin’ for them.  There just aren’t enough sauces to make up the lack of flavor when it comes to fish sticks. The best you could say about either of them is that they were a fast meal.

Continental Portugal has 586 miles of coast, and I am here to tell you that the the Portuguese know fish. I’ll admit that the first time I ordered fish in a restaurant, the eyes looking back at me took me aback. It’s just one of those things you have to get used to. But I kept a blind eye on the side of the market where the fish was sold.

Fate caught up with me, though. Our “Tia Lília” invited us to her home for a fish dinner. She was concerned that Harry was way too thin and she wanted to give me some cooking advice. Into the kitchen I went to watch her prepare a fish the likes I had never seen before. The body of it was kind of triangular and happily, it was dead. The first thing she did was teach me how to scale the fish, then followed it up with a demonstration of how to filet the fish. But she left the eyes on it.

While the fish was cooking, Tia put the finishing touches on the sopa da galinha  including adding the egg yolks that she had taken from the hen, and the chicken’s feet.  Portuguese bread, boiled potatoes, salad and fresh fruit completed the meal. And the fish? The best I had ever eaten. It was a dish that I made quite a few times once I got over the fish looking at me at the market.

1 pound of tomatoes, one medium sized onion, 3 tablespoons of butter or olive oil, half a cup of dry white wine (or grape juice), a bunch of Italian parsley, salt and pepper to taste

Season the sliced onion, with salt and pepper and simmer over a low flame.. Add the tomatoes peeled and seeded. After ten minutes, add the white wine. Put this sauce in a pan that can be put in the oven and put the groupers on top. Cook in medium heat for about 20 minutes covering them occasionally with the sauce. When done, serve with chopped parsley to garnish.

Are you up for a fish dinner? 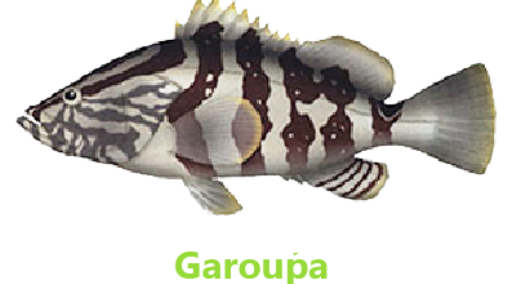