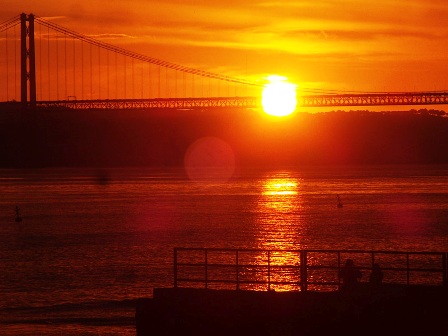 And suddenly, or so it seemed, the year had rolled around to June 30th once again. It had been two eventful years from the time I visited Portugal until our first anniversary. I was comfortably settled with the culture, and could speak well enough to go on with, but my ears…well, the Portuguese words ran past my ears much more quickly than my ears were able to catch them.

Harry, in spite of the landlady’s consternation, had painted the living room. We went to the store to pick a color. I was looking for a very pale peach to lighten up the room. Someone should have warned me. What looked like pale peach on the paint chip became pumpkin pudding on the wall. We lived with it. It made a great conversation starter.

I had become a competent food shopper by listening to and watching the Portuguese women shop. There was fresh produce all year ’round, but winter time was the time for broccoli, cauliflower, cabbage – and Harry didn’t care much for them. We got through it with a little cheese sauce poured over them and sometimes a hollandaise sauce.

Soccer barged into my life. I learned that Portuguese boys often learned to kick a soccer ball (futebol in Portuguese) before they could walk. And the aficionados of soccer are even more passionate about the sport than baseball fans in America are about going out to the ball game. I did find it much easier to watch than baseball.

My formal language lessons ended, but learning to speak Portuguese would be an ongoing project. Writing in Portuguese is fraught with its own pitfalls. Written Portuguese is much more formally expressed than in conversation, and requires great care in the writing. Another challenge was that two people in our organization were raised in Brazil. Brazilian Portuguese is less formal. Is it any wonder that people who didn’t know me thought I was Brazilian?

And, of course, Harry and I continued to hold a hope in our hearts that our dream would come to pass. We were ready, but the dream was not. We still had Sammi cat and I wasn’t lonely during the day.

Harry took me to a seafood restaurant in Lisbon to celebrate the first anniversary of our wedding. He had been saving up for quite some time so he could give me a lobster dinner. It was delicious, and we finished the meal with a performance of Cherries Jubilee.

The summer and the winter were the first year. And President Jimmy Carter was finishing his last year in office.

Have you ever eaten a flaming dessert?  What do you think you would like about Portugal?

21 thoughts on “The Portugal Years – Year One: The Summer and the Winter Were the First Year”