In Portugal, the way to get through the day until lunch (almoço) is that Portugal has what the British call, “elevenses.” In Portugal, it’s “lanche.” Sandwiches, pastries, tea and coffee fill in the gap between breakfast and dinner, which is not served until after one p.m. or 2 p.m.

Back in the day, employers gave employees a two-hour lunch. If a family lived close to where they worked, the wife went home, cooked a hot meal and served it before returning to work. Many of the shops closed right down to give employees a chance to rest (sesta). After the meal, the women got to clean up while the men went to the town square to socialize and drink their brandy and coffee before returning to work. 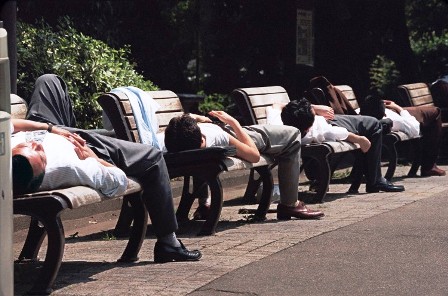 These meals typically begin with some kind of soup. Each region has its own style of soup, and maybe more than one. The soups with which I am most familiar are these:

Sopa à Portuguesa (which was the only food my children were raised on and Canja, which is chicken soup. The links take you to a little bit of history and the recipes for these soups.

After soup, there may be a meat, sea food or chicken dish with French fries, boiled potatoes or rice, and a salad. Dessert is rare, and is more often fruit than sweets. On special occasions there may be some sweet pudding or cake.

Around 5 or 6  in the afternoon, it’s time for another snack break to hold people over until the evening meal. The evening meal (jantar) is served between 8 and 9 p.m. and is another hearty meal – maybe leftovers from the afternoon meal.

Would you be so stressed out if your days had some leisurely built-in breaks like this?